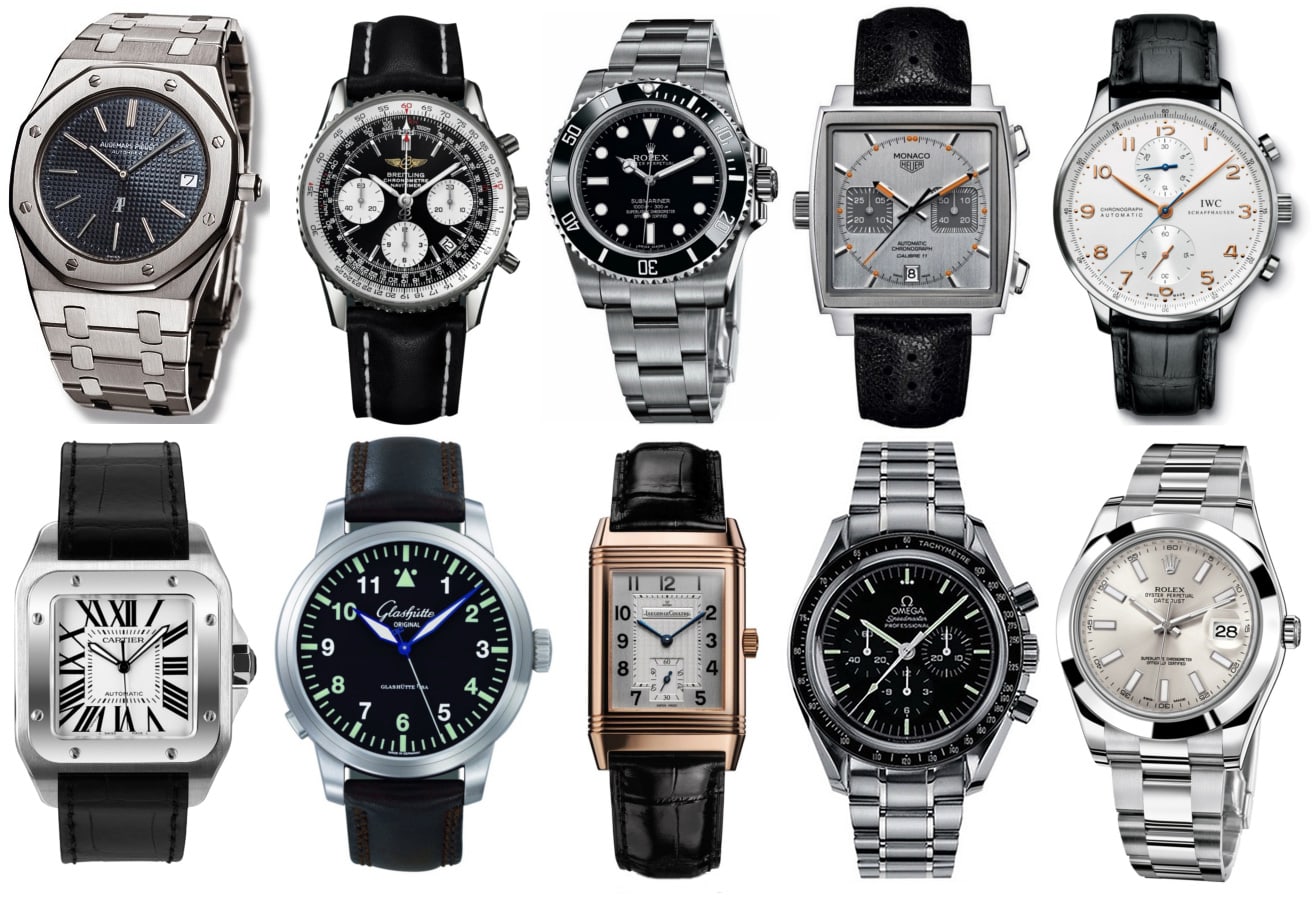 Every so often the landscape of the watch industry shifts: a key brand gets sold to a major watch group and the balance of power changes ever so slightly. Check out this interesting piece on who owns who?

Breguet, Blancpain, Glashütte Original, Harry Winston, Omega, Longines, Rado, Tissot, Jaquet Droz, Léon Hatot, Union Glashütte, Calvin Klein, Balmain, Certina, Mido, Hamilton, Swatch, Flik Flak
Based in Bienne, Switzerland, the Swatch Group is the largest watch company in the world. Of the 8.46 billion Swiss francs ($9.04 billion) in net sales that it reported for 2013, SF8.17 billion ($8.74 billion) came from watches and jewelry. The publicly traded company owns 18 watch brands spanning the entire price spectrum. Breguet is the most expensive among them, while Omega generates the most revenue and is the third-largest Swiss watch brand.
Swatch Sistem51
The Swatch Group is the most powerful company in the Swiss watch industry due to the many components makers it owns. Thanks above all to ETA, its movement-production company, the Swatch Group is far and away the top supplier of watch movements to the Swiss industry. It also owns Nivarox-FAR, the top supplier of hairsprings. In keeping with a 2013 ruling by COMCO (the Swiss Competition Commission), the Swatch Group will gradually slow its sales of mechanical movements to outside companies between now and 2020, though it will continue to supply escapements to third parties.
Harry Winston Project Z8.
The Swatch Group made a notable acquisition in 2013 when it bought Harry Winston. Not only does the purchase give the Swatch Group added strength in the jewelry category, which has been a minor part of the group’s business, it also gives the company greater access to the world diamond market. In 2014, the group won a lawsuit with Tiffany & Co. over production of Tiffany brand watches; consequently the Swatch Group no longer manufactures watches under this marque.
According to the 2013 annual report, the Swatch Group has 184 subsidiary companies. At the end of 2013, the group had 33,590 employees.

Vacheron Constantin, A. Lange & Söhne, Jaeger-LeCoultre, Roger Dubuis, Piaget, IWC Schaffhausen, Officine Panerai, Ralph Lauren**, Baume & Mercier, Cartier, Van Cleef & Arpels, Montblanc, Dunhill
Compagnie Financière Richemont SA is a leading player across a range of luxury products. It markets 20 brands, 13 of which produce watches; but by sales, it is predominantly a luxury watch group. Net sales for fiscal 2014 (which ended March 31, 2014) totaled 10.65 billion euros ($13.77 billion).
Richemont’s brands are grouped into divisions. The Specialist Watchmakers division is comprised of A. Lange & Söhne, Baume & Mercier, IWC Schaffhausen, Jaeger-LeCoultre, Officine Panerai, Piaget, Ralph Lauren, Roger Dubuis and Vacheron Constantin. The Jewelry Maisons are Cartier and Van Cleef & Arpels. Cartier is the largest brand in Richemont’s portfolio and the number-two watch brand in the world after Rolex. Until recently, Montblanc was its own division; it has since been folded into the Other Businesses division, which also includes the menswear company Dunhill.
Calibre de Cartier Diver 2
In fiscal 2014, the Specialist Watchmakers division made up 28 percent of all sales, with €2.99 billion ($3.86 billion). Thanks principally to Cartier, 51 percent of Richemont’s revenue came from the Jewelry division. A further 7 percent came from Montblanc, and Other Businesses made up 14 percent. Richemont is a publicly traded company and is based in Geneva. In fiscal 2014, it averaged 29,101 employees.

TAG Heuer, Bulgari, Hublot, Zenith, Dior, Fred, Chaumet, Louis Vuitton
LVMH Moët Hennessy Louis Vuitton SA is the largest luxury-goods group in the world. The conglomerate owns dozens of brands in the liquor, cosmetics, fashion, and watches and jewelry businesses. It also has an extensive retail division, with more than 3,000 stores worldwide. Based in Paris, the publicly traded company had total sales of €29.15 billion ($37.69 billion) in 2013. Its watches and jewelry division made up €2.78 billion ($3.59 billion) of that. LVMH has been building its watch division for the past 15 years; its most recent watch-brand acquisition was Bulgari, in 2012. Its biggest watch brand is TAG Heuer, one of the top-selling Swiss brands

Ulysse Nardin, Girard-Perregaux, JeanRichard, Gucci, Boucheron, Qeelin, Bottega Veneta
KERING is a large Paris-based group with a focus on fashion and retail. Formerly known as PPR, the publicly traded company changed its name in 2013. Last year, total revenues were €9.75 billion ($12.6 billion). Of that total, €6.47 billion ($8.37 billion) came from the luxury division, more than half of which was from Gucci. Kering has been building its watch business steadily over the last few years. In 2012 it purchased the Sowind Group, consisting of Girard-Perregaux and JeanRichard. Sowind makes Swiss mechanical movements, which appeared in Gucci watches for the first time in 2013. Another significant acquisition came when Kering bought the Swiss watch brand Ulysse Nardin. At the end of 2013, Kering had 35,000 employees.

Seiko, Grand Seiko, Credor, Pulsar, Lorus, Alba, Orient
The Seiko Group is a massive, publicly held conglomerate that makes many types of products. It consists of Seiko Epson and Seiko Holdings. The watch business, Seiko Watch Corp., is part of Seiko Holdings. Seiko Epson produces some components and is the parent company of Orient Watch Co., Ltd. Seiko produces all the components used in both its mechanical and its quartz watches. While it is known primarily for the Seiko brand of watches, the group also makes high-end mechanicals under Grand Seiko (which it launched on the U.S. market in 2010) and a variety of offerings through its other brands. For the year ended March 31, 2014, the Seiko Group’s total revenues were $12.75 billion (Seiko Holdings’ were 308.2 billion yen, or $3 billion; Epson’s were ¥1 trillion, or $9.75 billion). Of that, ¥150.7 billion ($1.46 billion) were in watch sales. As of March 31, Seiko Holdings had 13,439 employees. Seiko and Grand Seiko have become separate, independent brands as of Baselworld 2017.

Fossil, Relic, Michele, Zodiac, Skagen, Adidas*, Burberry*, Diesel*, DKNY*, Michael Kors*, Tory Burch*, Marc Jacobs*, Emporio Armani*, Emporio Armani Swiss Made*, Armani Exchange*, Karl Lagerfeld*
Fossil Swiss quartz Chronograph
Fossil, Inc. is a publicly held company based in Richardson, Texas. It is a power on the fashion-watch scene, posting sales of $3.26 billion in 2013, 77 percent of them from watches, mostly fashion watches. Fossil makes watches under its own brand names and those of licensors. Its most recent acquisition was Skagen, purchased in 2012. While most of the Fossil Group’s movements are Japanese quartz, Fossil has recently made forays into the Swiss-made market, including the introduction of Fossil Swiss, a line of Fossil watches with quartz and mechanical movements produced by the group’s subsidiaries in Switzerland’s Canton Ticino. In 2014 the group added a Swiss-made line to the Emporio Armani brand. It also introduced a licensed watch brand under the name of fashion designer Tory Burch.

Ebel, Concord, Movado, ESQ by Movado, Coach*, Hugo Boss*, Juicy Couture*, Tommy Hilfiger*, Lacoste*, Scuderia Ferrari*
Movado Red Label Day Date
Based in Paramus, N.J., Movado Group International is a leader in the affordable luxury and fashion-watch segments of the market. In addition to its hero brand, Movado, MGI has two higher- priced Swiss luxury brands: Concord and Ebel. Nearly half of this publicly traded group’s revenue comes from its six licensed brands, a business that MGI has been developing since the late ’90s. In the year ended Jan. 31, 2014, the group had total sales of $570.3 million. As of early 2014, the company had approximately 1,100 employees.

Citizen, Campanola, Q&Q, Arnold & Son, Bulova, Bulova Accutron II, Bulova AccuSwiss, Wittnauer, Caravelle New York, Bulova Clocks, Frank Lloyd Wright*, Harley-Davidson*, Frédérique Constant, Alpina, Ateliers de Monaco
Citizen Group is a major vertically integrated company, with its business principally in watches, machine tools, components and electronics. It is publicly traded under the name Citizen Holdings Co., Ltd. For the fiscal year ended March 31, 2014, Citizen had net sales of ¥309.9 billion ($3.01 billion), up 13.9 percent over 2013. Of that total, more than half (¥162 billion, or $1.57 billion) came from the Watches and Clocks division. At the end of 2013, Citizen had 22,233 employees globally. In addition to finished watches, Citizen is a major supplier of quartz movements made by its movement-manufacturing division, Miyota. In 2008, Citizen acquired the American company Bulova Corp., adding its watch brands to the Citizen stable. In 2012, Citizen moved into Swiss manufacturing, buying the movement-maker Manufacture La Joux-Perret and its Arnold & Son brand. In May 2016, In May, Citizen agreed to buy Switzerland’s Frédérique Constant Holding SA and its three watch brands — Frédérique Constant, Alpina and the tiny Ateliers DeMonaco.

Timex, Nautica*, Opex*, GC*, Guess*, Salvatore Ferragamo Timepieces*, Versace*, Versus*
The Timex Group of Middlebury, Conn., is best known for its famous mass-market brand Timex. It also makes seven brands under license agreements, including two, Ferragamo and Versace, in the luxury segment. The company is privately held and releases no data on its sales or production.

Corum, Eterna, Ebohr, Rossini, Codex, Rotary, Dreyfuss & Co., J&T Windmills
Citychamp Watch & Jewellery Group Limited, formerly known as China Haidian, has recently become a force on the international watch scene. The Hong Kong-based company has a strong position in the Chinese market with its brands Rossini and Ebohr. But in the last few years it has begun to acquire international brands as well. They include the Swiss brands Corum, which Citychamp purchased in 2013, and Eterna, acquired in 2011. Last year, Citychamp acquired the Swiss Dreyfuss Group and its brands, including Rotary.
Citychamp is a public company. In 2013 it had revenues of 3.176 billion Hong Kong dollars ($409.8 million U.S.). At the end of 2013, the group had approximately 3,000 employees in Greater China and 200 in Switzerland.

Perrelet, L.Leroy, Candino, Festina, Lotus, Jaguar*, Calypso*
The Festina Group is a private company based in Barcelona and owned by Miguel Rodriguez. Its key brands are Festina and Perrelet. Most of its brands are in the middle price range; two of them, Perrelet and L.Leroy, are in the luxury segment. Festina Group also owns Soprod, which makes movements for a number of Swiss brands, and the high-horology complications maker MHVJ. The Festina Group does not make its sales figures public.

Lots to take in here.  Did you spot your favourite brand in here..?  Did you know it was not an independent brand and owned by a big brother..?

What about the independents?  Another blog dedicated to these chaps coming soon.